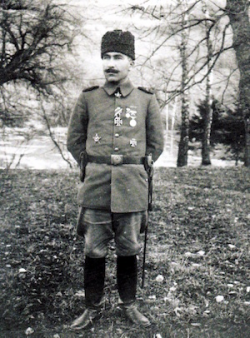 Yakup Şevki was born in Harput in 1876. He graduated from the War Academy in 1900. After several postings in the army, in 1912, he joined the headquarters of the Second Army in the Balkans. Later on, during the Balkan War, he served as the chief of staff of the artillery units in Çatalca.

When the World War began, Yakup Şevki was the commander of the Fortified Zone of Istanbul, but as fighting commenced on Turkish soil, he was deployed to Gallipoli. First he commanded the 19th Division and then the III Corps, both of which played vital roles in defending the peninsula.

Yakup Şevki was one of the elite officers in the Turkish Army. In addition to his military skills and capabilities, he could also speak eight foreign languages; French, English, German, Russian, Persian, Arabic, Kurdish and Serbo-Croat.  When Enver Pasha was choosing his “showcase” units to be deployed in European fronts, he appointed Yakup Şevki to command the XV Corps that was to fight in Galicia. He was very successful there and promoted to the rank of General.

In 1917, he assumed the command of the Second Army and the next year he became the commander of the Ninth Army, which was deployed to Azerbaijan and Georgia.

After the armistice, he was arrested and sent to exile in Malta. He returned in 1921 and took part in the War of Independence as one of the key commanders of Mustafa Kemal. In 1924, he became a member of the Supreme Military Council. Yakup Şevki Pasha died on December 20, 1939 in Istanbul.