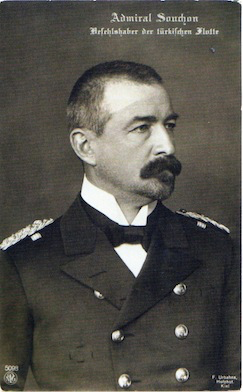 Admiral Wilhelm Souchon (1864-1946) was the German commander who fired the first naval shots of the First World War and also unveiled the Ottoman Empire's entry into the war.Commander of the German navy's Mediterranean squadron when war broke out in August 1914, Souchon opened the war when he fired upon two French Algerian ports on August 4, 1914. Afterwards deciding to re-coal in Messina he found his fleet in danger of being interned in the light of Italy's earlier declaration of neutrality.  He therefore resolved to make a dash for Istanbul, an operation he successfully undertook with the assistance of British ineptitude (presided over by Admiral Troubridge).

Appointed commander-in-chief of the Turkish battle fleet he and his ships Goeben and Breslauwere consequently transferred to the Ottoman Navy.  As with other German commanders serving with the Turks, including Otto Liman von Sanders and Baron von der Goltz, Souchon was expected to ensure protection of German national interests while serving with the Ottoman Empire. 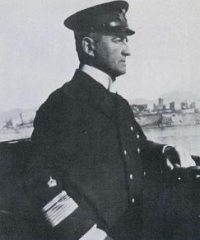 Souchon nevertheless found himself directly reporting to the Ottoman Minister of Marine Cemal Pasha.  However Souchon was granted a greater degree of command latitude than Liman, whose naked projection of German interests caused the Young Turk administration - notably Enver Pasha - to view him with suspicion. It was Enver who authorised the early undertaking of offensive Turkish operations in the Black Sea.  On October 29, 1914 Souchon was instructed to launch an attack upon the Russian port of Odessa, consequently bringing about war with the Entente Powers.

Souchon, who regarded the standard of Ottoman shipping and crews with contempt, was unhappy in his role.  His consistent call for submarine support to undermine Russian dominance of the Black Sea largely fell upon deaf ears. Returning at last to Germany in September 1917 he was appointed to command of the prestigious Fourth Battleship Squadron with the High Seas Fleet. Souchon's wartime career was brought to an unhappy close when, as Governor of the Kiel naval base, he watched with despair the mutiny of the German navy en route to revolution.