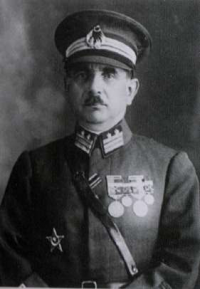 Nihat was born in 1878 in Plovdiv. He graduated from the War Academy in 1900, and after that he joined the Fourth Army. In 1905 he was appointed to the Third Army and four years later he took a post at the General Staff in Istanbul. When the Balkan War broke out, he was serving with the III Corps. He took actively part in the war, but on November 1, 1913, during the Battle of Pınarhisar, he was captured by the Bulgarians. He was imprisoned for two months, after which he returned to Istanbul.

In March 1915, Nihat was appointed as the cihef of staff of the Second Army and after six months in this post, he was made the commander of the fortified zone of Çanakkale. Promoted to general in December 1915, Nihat Pasha was appointed two years later as the commander of the Second Army and simultaneously he undertook the post of the Governor of Adana. Nihat Pasha took part in the War of Independence as well and ater the foundation of the Republic he was active as the chairman of the Supreme Military Court. In 1942, he resigned and joined the parliament as a deputy from Ankara. Nihat Pasha died in Istanbul in 1954.