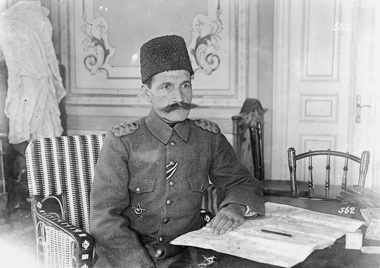 Mustafa Hilmi was born 1863 in Istanbul. He graduated from the Military Academy in 1885 and spent for years of training in Germany, which he completed in 1891.

Upon his return to Istanbul, he first became an infantry instructor at the War College, took part in the Turco-Greek War of 1897, and climbed the ranks to became a general in 1907. During the Balkan Wars, he was the commander of the Kırkkilise Division, and for a while he served with the Legal Inspection Commission of the Ottoman military.

In November 1914, a few days after the Ottoman Empire’s entry into the First World War, Mustafa Hilmi Pasha was appointed as the commander of VI Corps, which during 1916 and 1917 saw action in the Romanian front. After the armistice, he assumed the post of the undersecretary of the Ministry of War, where he stayed for only five months.

In March 1919, he left active duty, and on October 2, 1923, he resigned from the army. Information about his later life is not available.