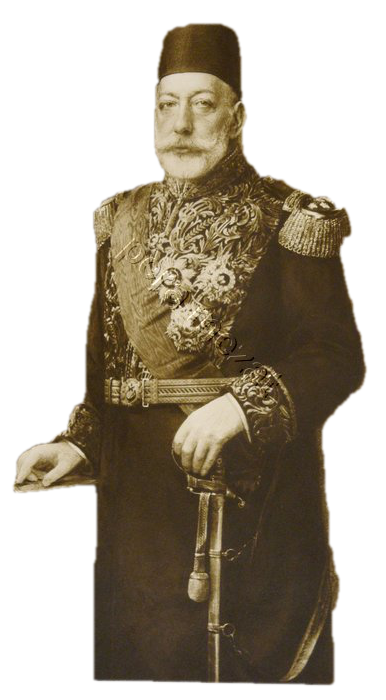 Mehmet Reşad, also known as Mehmet V, is the 35th emperor of the Ottoman dynasty. He was born on November 2, 1844 as the son of Sultan Abdülmecit and Gülcemal Kadın. He was the third oldest among eighteen sons of  Sultan Abdülmecit.

Reşad Efendi married in 1872 to Kamures Kadınefendi. During the reign of Sultan Abdülhamit (1876-1909), he lived at the Chamber of Crown Princes at the Dolmabahçe Palace, under strict surveillance. He spent his time reading Persian literature and the works of the great mystic Rumi. After 32 years in complete isolation, when the constitutional rule was reinstalled in 1908, he appeared to the public as the heir apparent to the Ottoman throne.

In 1909, following the abdication of Sultan Abdülhamit, the Ottoman Parliament decided Reşad Efendi to ascend to the throne under the name “Mehmet V”. His accession ceremony was held at the Ministry of War on April 28, 1909, followed by a sword girding ceremony at Eyüp Sultan Mosque.

It was a time when the Empire was sliding into chaos and the Committee of Union and Progress (CUP) was exerting great influence on all the parts of the government. Sultan Mehmet Reşad did not manage to be more than a rubber stamp executive.

The Ottoman Empire entered the Balkan Wars following the decision by the Council of the State which was chaired Sultan Mehmet Reşad. However, he had no real political power and all the decisions were taken under the pressure of the CUP. After the coup d’etat on January 23, 1913, when Enver Bey raided the Sublime Porte, he appointed a CUP protégé, Mahmut Şevket Paşa as the Grand Vizier and gave the other CUP leaders important posts in the government

In November 1914, Sultan Mehmet Reşad declared war against the Allied nations, but he neither had any influence during the process the led to an alliance with Germany and entry to the war, nor did he play any role during the course of the war.

When Grand Vizier Sait Halim Paşa resigned on February 3, 1917 and replaced by Talat Paşa, Sultan Mehmet Reşad totally lost control on government affairs. There have been even cases when he was left uniformed about political developments and decisions. Soon his health began to deteriorate. Sultan Mehmet Reşad died at the Yıldız Palace in Istanbul on July 3, 1918. He was buried at Eyüp.