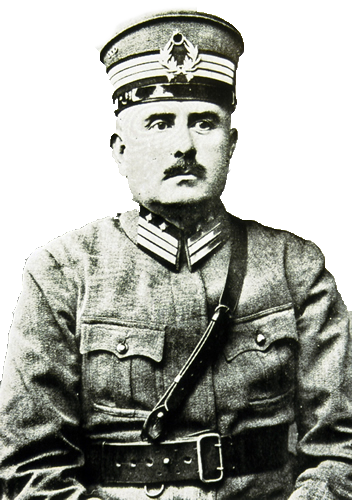 Kazım Karabekir was born in 1882 in Istanbul. He graduated from the War Academy in 1902 and the Army Staff School in 1905. His first place of duty was Monastir, where, together with Enver Bey, he opened the local branch of the Committee of Union and Progress (CUP).

After the reinstalment of the constitutional rule in 1908, he was assigned to the Second Army in Edirne. He was with the Liberation Army, which suppressed a counter-revolutionary rebellion in Istanbul in 1909 and during the Balkan War he took part in the defense of Edirne.

When the World War broke out, he was first sent to Gallipoli, where he fought against the French and then, in 1915, he became was promoted to Colonel and went to Iraq, where he was the Chief of Staff of the German General Colmar von der Goltz. In 1916, he was the commander of the XVIII Corps that captured Kut al-Amara from the British and the next year, when he was appointed to the command of the II Corps stationed in Diyarbakır, he was also the acting commander of the Second Army. In this capacity, in 1918, he recaptured Erzurum and Erzincan from the Armenians and the invading Russian forces. He took his troops to Azerbaijan and forced the British units out of this region. The same year he was made a general.

After the armistice, he worked together with Mustafa Kemal and during the War of Liberation he commanded the Turkish forces in the Eastern Front. He liberated Kars from the Armenians and signed the Agreement of Gyumri with Armenia, on behalf of the Ankara government.

Kazım Pasha joined the Parliament in 1923 and formed the Progressive Republican Party the next year. This party was closed on May 3, 1925 and Kazım Pasha was tried due to his alleged involvement in the assassination attempt against Mustafa Kemal Atatürk. He was found not guilty, thanks to Mustafa Kemal’s intervention, but all the relations between these two comrades-in-arms were broken.