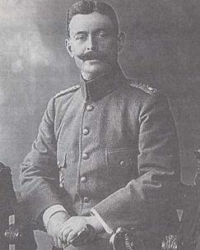 Halil Sami Bey was born in 1866. He fought in Balkan Wars, first as the commander of the Volunteer Regiment from Izmir and then as the deputy commander of 31st Division.

In the First World War, Halil Sami was deployed to Gallipoli. On the first day of the Allied landings, April 25, 1915, he was the commander of 9th Division which resisted the landing enemy. However, he later quarreled with General Liman von Sanders about the war plans. He was taken off the duty on Juli 10, 1915 and was forced to retire from the army. Unfortunately there is no more information about him. Halil Sami Bey passed away in 1925.