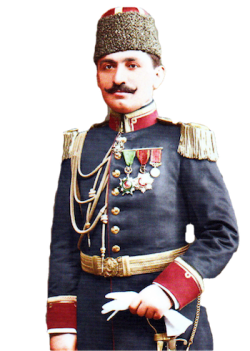 Hafız Hakkı was born 1879 in Monastir. He studied at the military high school in his home town, after which he went to Istanbul and enrolled in the War Academy. He graduated in 1902 as a captain, and over the following six years he served in Monastir and Salonica, where he had remarkable achievements in the pursuit of Bulgarian bands and revolutionary committees. Hafız Hakkı was promoted to the rank of major in 1908. In this capacity, he first served at the Ottoman High Command in Istanbul, had a brief stint as military attaché in Vienna, and returned to Istanbul to join the Liberation Army, which suppressed the counter-revolutionary rebellion in April 1909. He fought in the Balkan War of 1912-1913 as the deputy chief of staff of the I Corps and took part in the defence of Edirne.

In 1914, as he was still a lieutenant colonel, he was appointed as the deputy chief of the general staff, and soon he was promoted to the rank of colonel. On December 7, 1914, Hafız Hakkı was appointed as the commander of the X Corps which was deployed to the Caucasian front. When operations began on December 22, Hafız Hakkı was leading his troops, together with Enver Pasha who was also in the battlefield, and historians commonly regard Hafız Hakkı as one of the architects of the disaster in Sarıkamış, where thousands of Turkish soldiers perished of severe cold and epidemics. When Enver left the frontline on January 3, he promoted Hafız Hakkı to the rank of general and assigned him to the command of the Ottoman third Army. However, Hafız Hakkı was not to be able to keep this position for long. He contracted typhus and died in Erzurum on February 15, 1915.

Hafız Hakkı Pasha was a military writer, who wrote several articles for daily newspapers under the pen name ‘Vicdani’. He has also authored two books on military issues: ‘Şanlı Asker’ (Glorious Soldier) and ‘Bozgun’ (Defeat). Like Enver Pasha himself, Hafız Hakkı Pasha was also an ‘imperial groom’, he was married to Behiye Sultan, one of the granddaughters of Sultan Murad V. After the dissolution of the Ottoman Empire, Behiye Sultan was exiled to Cairo where she passed away in 1940.