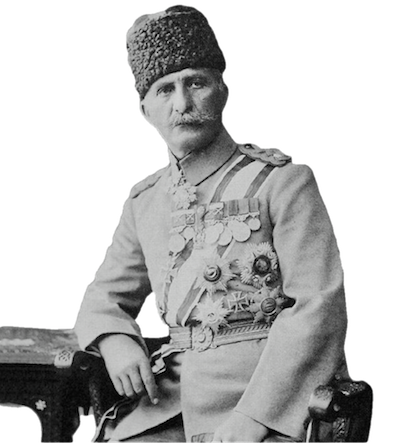 Mehmet Esat was born in Ioannina in 1862. In the year he graduated from the Army Staff School, 1890, he was sent to Germany on a military mission. He returned to Istanbul in 1893 and he was assigned as an aide to Colmar von der Goltz, the German general who was in charge of reforming the Ottoman Army.

When the Turco-Greek War broke out in 1897, he went to his hometown Ioannina, as the chief of staff of the corps stationed there. After the war, he began to teach at the War Academy. Mehmet Esat, who was made General in 1902, became the deputy commander of the Third Army, then stationed in Salonica.

In 1911, following Italy’s declaration of war on Turkey, Esat Pasha returned to the corps in Ioannina, this time as the commander. In the Balkan War,  he managed to defend the city successfully for seven months, together with his brother Vehib, who was the commander of the Fortified Zone of Ioannina.

In the World War, Esat Pasha was one of the main Turkish actors in the Gallipoli campaign. He was the commander of both the III Corps and the Arıburnu North Army Group. He was very successful in organizing the Turkish efforts in the Conkbayırı section, the northern part of the peninsula. On November 3, 1915, when Goltz Pasha went to the Mesopotamian front, he became the commander of the First Army. In 1917, Esat Pasha went to Berlin and toured both the eastern and western fronts of Germany.

Upon his arrival to Turkey, he was made the commander of the Fifth Army on February 21, 1918, where he stayed for four months, before assuming the command of the Third Army in the Caucasus. He retired in 1919.