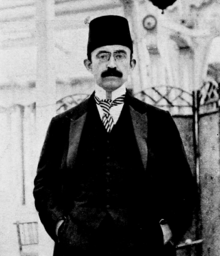 Mehmet Cavid was born in Salonica in 1875 to a merchant family. After he graduated from the “Mülkiye” in 1896, he worked for Ziraat Bankası and the Statistics Department of the Ministry of Education for a while. In 1899, he was assigned as the head clerk of the Administration of Secondary Education. At the same time he was also teaching finance and economics.

His opposition to the government’s practices of tithe caused him to be banned from teaching. He left Istanbul, went to Salonica and continued teaching at a private school. It was this period in his life, when Cavid Bey established contact with the Committee of Union and Progress (CUP), where he soon established himself as one of the most influential members, thanks to his knowledge of economics and ability to speak in public.

In 1908, upon the reinstallment of the constitutional rule, Cavid returned to Istanbul, entered the Parliament as a deputy from Salonica and began teaching again. He became the Minister of Finance the next year. Cavid Bey resigned in 1911, but he was made the Minister of Public Works in February 1912, where he stayed only for a few months, before returning to the Ministry of Finance.

Cavid Bey was the Minister of Finance in the Sait Halim Pasha government established in March 1914. He resigned on November 5, 1914 to protest Turkey’s entry to the World War. Although no more in the government, he continued to influence the war time economic policies in his capacity as a member of the CUP. This was the period, when he left his liberal, anti-protectionist ideas aside and adopted the “national economy” view.

On February 10, 1917, the new Grand Vizier, Talat Pasha, made him Minister of Finance again and he kept this post in the Ahmet İzzet Pasha government established a few days before the armistice.

After the war, he was tried in absentia by a military tribunal and sentenced to fifteen years in prison. He left the country in December 1919 and began to support the national resistance from abroad. In February 1921, he attended the London Conference as an advisor to the Ankara delegation. He also went to Lausanne, as the financial advisor of the Turkish delegation, but he was fired because he could not agree with İsmet Pasha about how the distribution of Ottoman debts should be arranged.

In 1926, Cavid Bey was arrested on charges of being involved in the assassination attempt against Mustafa Kemal. He defended himself well at the court, but it did not change the verdict. Cavid Bey was executed on August 26, 1926 in Ankara.