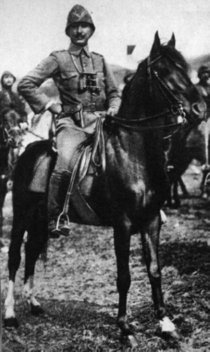 Ali İhsan was born in 1882 in Istanbul. He studied first at the Artillery School and then went to the War Academy, from which he graduated in 1904 as the top of class.

During the World War, he served as commander in the Caucasus and Mesopotamia fronts. In a three year period between 1915-1918, he commanded first the IX Corps, then the IV Corps and finally the Sixth Army. In Iraq, he had great success against the British in the battles of Kut and later he took his troops inside Iran and fought the Russians.

When the armistice was signed, on November 30, 1918, Mosul and its surroundings was under the control of Turkish forces commanded by Ali İhsan Pasha. The British demanded the evacuation of the town. Ali İhsan Pasha refused, but when the Turkish High Commanded ordered him to do so, he had no option but to withdraw from Iraq.

Ali İhsan Pasha was arrested upon his arrival in Istanbul and sent to exile in Malta. When he was released in September 1921, he joined the national resistance and took over the command of the First Army in the War of Liberation. The next year, due to his personal conflicts with İsmet Pasha, he resigned.

In 1944, he was arrested because of his anonymous letters criticising President İsmet İnönü (İsmet Paşa) and sentenced to 15 months in prison. In 1954, he was elected to the Parliament from the Democrat Party. Ali İhsan Pasha died in 1957.