The Balkan War was a complete disaster for the Ottoman Empire. European territories were lost, together with the population living there. The army had not only suffered substantial losses during the war, but its organization had collapsed as well. Being aware of the situation, the Ottoman General Staff launched a comprehensive reform initiative for the army, which also included the redesigning of the war plans. Before the Balkan War, the Ottoman Army had twelve alternative campaign plans, but all of them were outdated now. They were going to be replaced by one single plan. 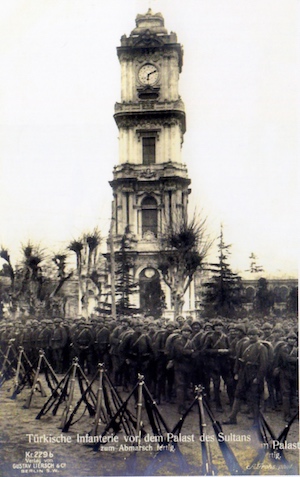 Turkish infantry in front of the Dolmabahçe Palace

The chief-of-staff of the German Military Mission, Col. Bronsart von Schellendorf, completed the Primary Campaign Plan for the Ottoman Army on June 7, 1914. This plan was prepared before the events of summer 1914, which would lead the entire world to a catastrophe of unprecedented scale, and therefore it reflected only the strategic situation that was current by then, focusing on the possibility of a renewed threat from the Balkans. Accordingly, the plan was built on the assumption that the Ottoman Empire would simultaneously oppose both a Balkan coalition and Russia.

According to the Schellendorf Plan, an observation army was to be deployed at Greek and Bulgarian borders. This army would only observe the enemy movements and it would remain in the defensive, refraining from provocating the enemy and/or launching offensive operations. The army to be deployed against the Russians in Eastern Anatolia was to take advantage of favorable operational conditions by looking for opportunities for offensive operations in order to gain a tactical advantage against the Russians. At the same time, special attention was to be given for the defense of Istanbul and the Turkish straits. Fortified zones established in Edirne and Çatalca would protect the road to the Ottoman capital and additional forces to be brought from Syria and Mesopotamia would support the units deployed there. The major concentration of forces would be at positions behind the Çatalca line.

After the events of July 1914 in Europe, the plan had to be revised, since the political situation had changed dramatically. Ottoman Empire was bound to Germany with a secret treaty signed on August 2, 1914, followed by another treaty with Bulgaria. Since the Ottoman Empire had sided with Germany, the list of potential enemies included not just Russia, but the entire Entente, whereas Bulgaria was not an opponent anymore. An offensive against the Romanians and Serbs could be a possibility and attacking the Russians in the Caucasus and Eastern Anatolia could produce more favorable outcomes than what was previously planned, because instead of concentrating its forces against Turkey, Russia was now bound to be involved against Germans and Austrians in other parts of Europe. Similarly, an offensive against Egypt and the Suez Canal would be good idea, given the probability that Britain would prioritize the European fronts it would be fighting at. 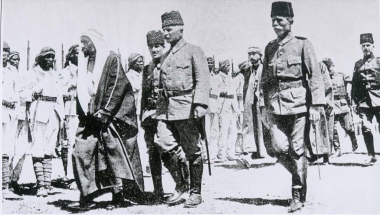 Responding to these changing conditions, Bronsart von Schellendorf began to revise the plan and completed it on September 6, 1914. Accordingly, the Fourth Army was to attack Egypt, whereas the Third Army would launch an offensive against the Russians in Eastern Anatolia.

Not everyone in the Ottoman Army was in agreement with Schellendorf. Two days before he completed his revised plan, the second assistant chief-of-staff Col. Hafız Hakkı Bey introduced his own campaign plan, which was much more aggressive in comparison. Accordingly, troops from Istanbul and Thrace would be shipped to the eastern Black Sea coast, where they would join an all-out offensive against Russians, whom, Hafız Hakkı hoped, would be paralyzed after being defeated by Germans in Eastern Europe. Hafız Hakkı renewed his plan in October, this time envisioning assistance to be provided for Romania and Bulgaria against the Serbs, as well as an attack on Suez Canal and offensive operations against Persia. Hafız Hakkı’s plans were ambitious, however they had to be shelved away because the Ottoman Army had not enough resources to execute them. 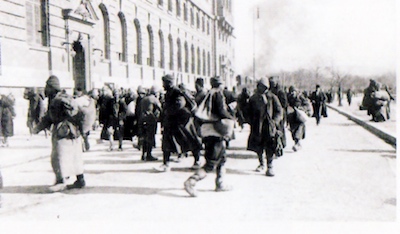 Turkish soldiers waiting for entrainment at Haydarpaşa Station in Istanbul

As the war in Europe began, the Ottoman General Staff had embraced Schellendorf’s Primary Campaign Plan, which was supported by a Concentration Plan for organizing the command and control of the army and positioning it to execute the campaign plan, as well as a Mobilization Plan for generating forces and preparing them for war.

Resources and equipment were needed to actualize the campaign plans, however mobilizing the army proved to be the most challenging task for the Ottoman Empire on the eve of the World War. The Empire was simply not strong enough to fight another major war. Its resources were insufficient, its industry was underdeveloped and its finances were bankrupt. Railroads and communication lines were so underdeveloped that conducting schedule-based deployment schemes was not possible.

First of all there was the manpower problem. The estimated population of the Ottoman Empire before the war was around 25 million, of which ten million were Turks, six million Arabs, 1.5 million Kurds, 1.5 million Greeks and one million Armenians. Despite this diversity, for the military planners in Istanbul it was only the Turks who were thought to bear the burden of the military. The rest of the population was in general deemed a hostile element, which did not regard their destiny to be the same as that of the Empire. It has to be noted, however, that individuals from non-Turkish groups performed their services within the war machinery, and did so in a loyal way. Still, they were not considered to be dependable elements within the army. 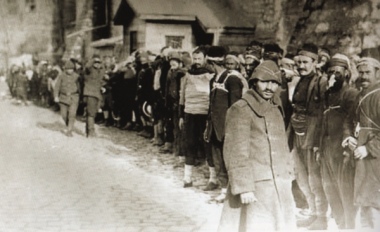 Transportation and communication were major problems, which made it extremely difficult for the Empire to wage a modern war against several well-equipped industrial nations. Railways in the European territories were lost during the Balkan War and there were only fragmentary railways in Anatolia, which did not constitute a system. Ordinary roads on which the army depended were in no better condition than the railways. They were few, fragmented and poorly maintained. Sea transport, on the other hand, was relatively efficient, however it required a strong navy, which the Ottoman Empire did not have, to be protected against enemy menace.

The telegraph system was better developed than the transportation system. There were 55,383 kilometers of telegraph lines and an additional 11,027 kilometers attached to railways. However the system was still hardly capable of meeting the needs created by the war. A wireless system was developed only in the latter part of the war and was not of much practical use. On the other hand, telephone services were only available in Istanbul, however telephone communication was not of general use at the fronts, with the exception of the Dardanelles. 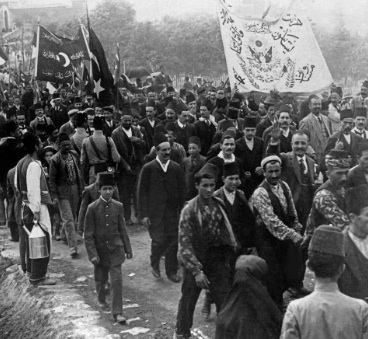 Ottoman men responding to the call to arms | United Archives

From the viewpoint of its economic and financial situation, the Ottoman Empire was by no means a country that shared in the new conditions created by the industrial revolution in Europe and the accumulation of capital. The Empire was not only suffering from widening budget deficits and spiraling foreign debt, but also it had to pursue the struggle against industrially equipped nations without the help of industrial equipment and facilities, and depend for the most part on limited imports from Germany and Austria-Hungary.

The peacetime army had the classes of 1891, 1892 and 1893 (men aged 20 to 22) under arms, with a total of 200,000 men and 8,000 officers. The period of active obligatory service was two years for infantry and cavalry and three years for the artillery. All men were liable for military service and were drafted as a group according to their chronological age. Liability for service began at the age of 20 and ended 25 years later.

General mobilization was issued on August 2, 1914 with all units of the armed forces, with the exception of the VII Corps in Yemen, 21st Division in Asir and 22nd Division in Hejaz, were ordered to start preparations for war. August 3 was to be counted as Day One of Turkish mobilization. With the mobilization, classes of between 1875 and 1890 were called to duty as reserves and those born between 1868 and 1874 were called as home guards. Each age class was about 90,000 men and the General staff believed that around 1 million men and 210,000 animals would be easily available for recall. The mobile field army was planned to have a strength of 460,000 men, 14,5000 officers and 160,000 animals, whereas the gendarmerie was to consist of 42,000 men, including gendarmes, frontier guards and mule-mobile troops. The rest of the men called under arms were to serve in fortress garrisons, coastal defenses, communication and transportation services. 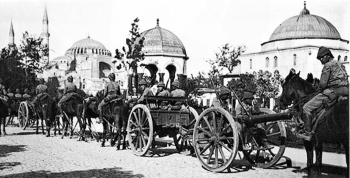 The call to arms was responded to by the population and soon the General Staff realized that the number of men joining the ranks was higher than what they hoped for. Due to this excess, depot units were established and some older age groups were sent back home, to be recalled when necessary. Since there was no proper population survey system in the Ottoman Empire, the process of recruitment became a big problem, although there was no shortage of men. 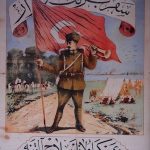 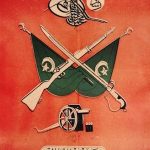 There were other problems as well. First of all, there was no coordination between the Mobilization Department of the General Staff and the relevant offices of the Ministry of War. Moreover, the German Military Mission were doing their best to keep the process under their control in order to ensure that the Ottoman Army was mobilized in a way that would best suit the German objectives. Despite all the problems and shortages, mobilization was completed on September 25, 1914, in other words within 53 days. It took longer than the estimated 40-45 days, however it was conducted more efficiently compared to the mobilization prior to the Balkan War. Mobilization helped to fill in the ranks of Ottoman army units and to restore them to their pre-Balkan War strength. However, although it went through a comprehensive reorganization process, the Ottoman Army was still far from its full strength as the Empire entered the war. 14 out of 36 infantry divisions organized in August 1914 were in the process of being entirely rebuilt, whereas 8 had gone through major redeployment during the year. The overall effectiveness of new and redeployed units was very low.

The Ottoman Army, which consisted of four armies in 1914, established the Fifth and Sixth Armies in 1915; the Seventh, Eighth and Ninth as well as the Yıldırım and Caucasian Army Groups in 1917. However, although the number of armies was increasing, its resources were drying off, both in manpower and supplies. By 1918, nothing much was left from the Ottoman Army.