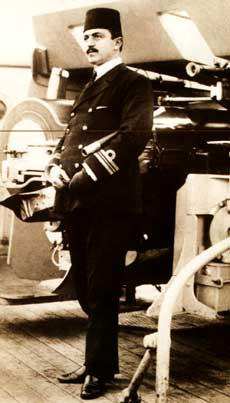 During the Balkan War, the Ottoman Ministry of Navy was aware of the fact that as long as the Greek dreadnaught Averof was present in the Aegean, there was little chance for the Turkish fleet to eliminate the smaller units of the Greek Navy. It was proposed that a crusier should be sent to the Aegean Sea to attack Greek ports and sink merchant vessels, so that Averof could be drawn from the Dardanelles to chase the marauder. The job was given to Hamidiye. An order dated January 13, 1913 cabled to Captain Rauf Bey stated that "the decision of the High Command to send a warship on a solitary mission in order to ease the operations of the Navy has been approved by the government; Hamidiye has been deemed suitable for this mission, which should commence as soon as weather conditions allow."

Hamidiye left the home waters of the Dardanelles on January 14, 1913. The next day, she arrived the island of Şira, where a British merchant vessel and a Greek auxiliary were anchored. Hamidiye sunk the Greek ship and bombarded the port. The original plan was to leave the Aegean and sail westwards to the Adriatic. However, Rauf Bey realised that the quality of the coal they had was too low and refuelling was necessary. Hamidiye changed direction and arrived Beirut on January 18. The next day, Hamidiye anchored at Port Said. Although Egypt was nominally under Turkish rule, the influence of British authorities was enough to ensure that only 150 tonnes of coal was given to Hamidiye although she needed 700. Hamidiye passed through the Suez Canal and sailed into the Red Sea.

Seeking to receive coal and communicate with the High Command in Istanbul, Hamidiye sailed down the Red Sea and reached Jeddah on February 3. A small amount of coal was bunkered, boiler repairs were carried out and communication with Istanbul was established. Upon consultation with the High Command, Rauf Bey prepared the plans of an expedition into the Mediterranean. Hamidiye was ordered to attack the Greek transportation routes off the Albanian coast, because an attempt to break through the Dardanelles was considered to be too dangerous.

Hamidiye was supposed to meet with an Italian steamer at Malta and receive coal from that vessel. She arrived Malta on February 14, only to find out that the Italian steamer had already left for Beirut. Only a limited amount of coal was bunkered from Maltese suppliers, which made operations in the Adriatic impossible. Hamidiye left Malta on February 17, arrived in Gaza on February 22, without encountering the enemy as she sailed past the islands of Crete and Corfu. The next day, she anchored at Haifa and took on 350 tonnes of coal supplied by the Hejaz Railways. From there, Hamidiye sailed towards the Anatolian coast and arrived in Antalya. 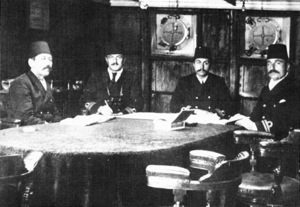 Meanwhile, the Ottoman Western Army was in need of money and ammunition, which had to be carried to Albania. The High Command gave this mission to Hamidiye, who first sailed to Beirut to bunker the coal from the Italian steamer and then to Ervat Island off the Lebanese coast to load 50 tonnes of ammunition and 10 thousand golden liras. Rauf Bey was ordered to take this cargo to Semeni River on the Albanian coast. Hamidiye departed on March 8 and in four days she appeared off Durazzo where she shelled a Greek military camp. This shelling had alerted the Greek units at Hamidiye's second destination, Santo Giovanni di Medua, where seven Greek steamers and an Austrian ship were at anchor. Rauf Bey asked these vessels to surrender and upon their refusal Hamidiye opened fire. Six Greek ships were sunk, one was heavily damaged and the Austrian steamer beached itself. More than 120 Serbians lost their lives in the attack.

Four Greek gunboats tried to hunt Hamidiye in the Straits of Otranto, however the cruiser managed to escape. Only 250 tonnes of coal was left, all the ports along the Aegean Sea and the waters off the Anatolian coast were blockaded, so Rauf Bey decided to sail to Egypt. He asked the High Command to exert some pressure on the Egyptian government so that Hamidiye could get sufficient coal. Hamidiye arrived in Alexandria on March 16, but there were again difficulties in obtaining coal. Fortunately, the khedive of Egypt arranged for coal to be loaded to Hamidiye outside the port. 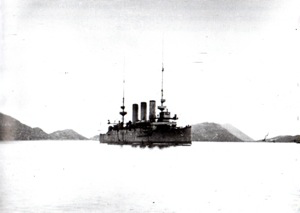 Hamidiye in the Aegean | Turkish Navy

Istanbul was expecting Hamidiye to return to Albania, however given the problems with coal and the need for refittings, Rauf Bey knew that this was not possible. After cruising between Beirut, Gaza and Haifa for a week, Hamidiye went to Antalya. On March 29, she departed again, this time to operate around the waters south of Crete. A Greek ship carrying bricks was captured and taken back to Antalya, where Rauf Bey received the news that there are some Greek warships sighted around Rhodes which were tought to be chasing Hamidiye.

Hamidiye could only sail at a low speed because her boilers were damaged. Coal was running low and Rauf Bey also knew that the Greeks were watching the port of Beirut, anticipating her arrival there. Meanwhile Greece had stopped all merchant shipping in East Mediterranean. After stopping in Gaza and Port Said, Hamidiye sailed through the Red Sea towards Jeddah. Meanwhile, on April 7, the Ottoman Ministry of Navy reported to the High Command about Hamidiye: "It would take no less than two months to fix Hamidiye's boilers. Given the state of war, refittings cannot be made in neutral ports due to international law. The ship should sail to Jeddah and wait there until the end of the war. In case if the Coal Directorate at Port Said reports the passage of the Greek fleet into the Red Sea, Hamidiye should then find safe haven in a neutral port." 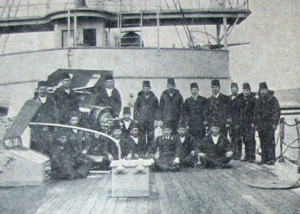 Greeks were not intending to send their fleet to the Red Sea. On April 6, Hamidiyearrived at Jeddah. The Greek High Command expected her to sail back to the Mediterranean to resume operations. Three Greek warships were anchored 3.5 miles off Port Said, and for 45 days they waited there for Hamidiye, who left Suez only on August 19. She was now on her way back home. On September 7, 1913, she arrived at Istanbul, where Captain Rauf Bey and his crew received a big welcome from the population.

In his memoirs, Rauf Bey writes about a visit to Germany in 1914, where he, as the chief of staff of the Ottoman Navy, and Cemal Pasha, Minister of the Navy, were received by Kaiser Wilhelm: "Cemal Pasha introduced us (to the Kaiser). First he greeted Vasıf Bey and then when it was my turn he shook my hands very warmly with his both hands and said 'I followed your operation, the cruise of Hamidiye, closely. Our Emden tried to imitate you. However she failed. You returned to your country with glory, but they went down in Far East.' I thanked for these kind words." 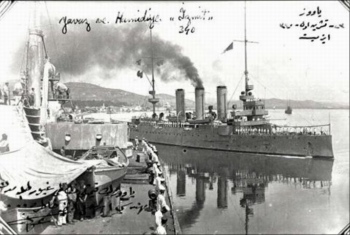 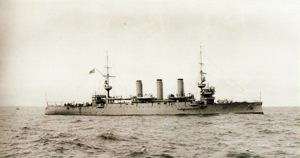 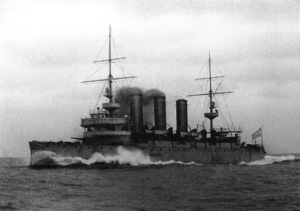 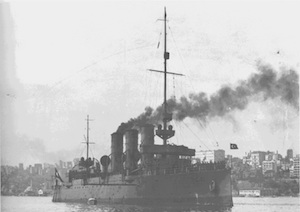 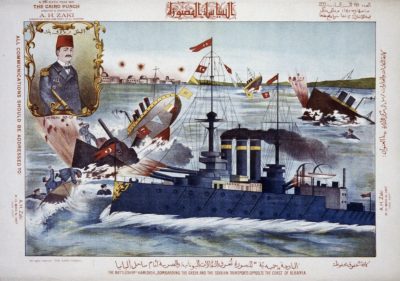 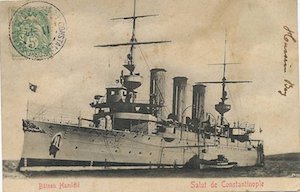 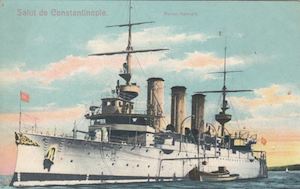 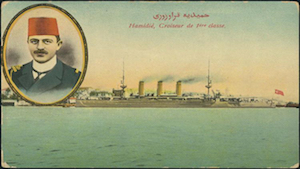 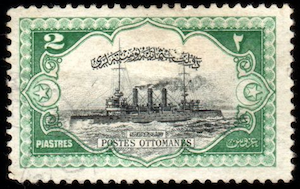 Hamidiye on an Ottoman stamp 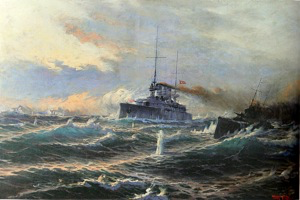 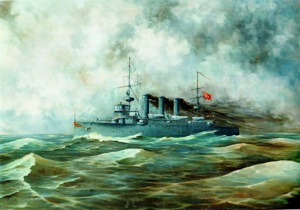 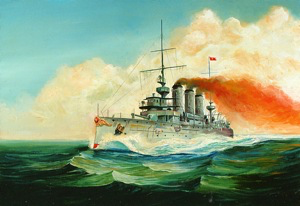