Wartime conditions created major problems for Ottoman food supply. Despite being an agricultural country, the Ottoman Empire was dependent on imports of foodstuff, even in peacetime. The reason for this insufficiency was that the agricultural sections of the country were producing just enough for their local needs, and Istanbul as a large consumption center could not get sufficient supplies from its hinterland. It was only four times in the 25 years before the war that Istanbul had been able to receive an adequate supply of food from the interior. Another factor affecting food production and consumption in Turkey was that the cost of production was so high that it was extremely difficult for local producers to compete against imports. 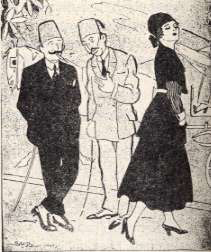 Satirizing sugar shortages
- "I have been chasing her for two months; I have offered her an automobile, but she doesn't care."
- "You should have offered her two packs of sugar; then she would be all yours!"
Cartoon by Sedat Simavi | Yeni Zenginler, 1918.

The outbreak of the First World War made the situation worse. Both production and imports declined rapidly, whereas the demand for food increased. Market dynamics could no longer be relied on for ensuring the provision of food for all groups of the Ottoman society. Moreover, the transportation network was not capable of responding to wartime needs and pressures in an efficient manner. 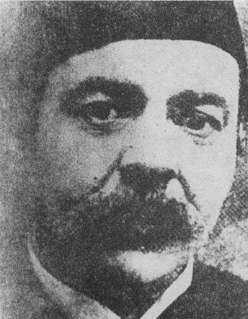 The government devised a series of policies to cope with these problems. On one hand, it intervened in the market to boost the production of foodstuff and on the other hand it attempted to ensure a more equitable distribution of available food. The latter was mainly done through the implementation of a comprehensive system of rationing in Istanbul. Initially, it was the municipality of Istanbul that was responsible for the provisioning of food supplies in the capital. However, it soon turned out that the municipality was incapable of performing this task in an efficient manner. In January 1915, an influential member of the governing party (Committee of Union and Progress – CUP), Kemal Bey (also known as Kara Kemal) was appointed as the head of the Tradesmen’s Union (Esnaf Cemiyeti), which was in charge of the food provision. Kemal Bey was to have unrestricted authority in all food problems, including the authority to seize mills and bakeries for the common good. This move was followed by the establishment of a Food Board in July 1916. By then, a system of “war agriculture” was in place in the Ottoman Empire.

It was in 1916, when the government had finally realized that the food situation was critical and it was likely to harm the war efforts. A general campaign was launched with the aim of increasing food production and the legal framework of this campaign was established with the Law of Agricultural Service, passed in October 1916. This law made large corporations in urban areas responsible for securing the necessary equipment and labor, and cultivating specified amounts of land; required all farmers to cultivate a minimum area; and required all men and women, who were not under arms, to engage in agricultural service.

These measures, accompanied by additional budgetary appropriations for supporting agriculture, had a positive impact on production levels, however, as Ahmed Emin Yalman argued, they were rather late, “because human lives and draft animals employed in agriculture had been too carelessly wasted for two years; and the means of production, always primitive and deficient, had in many regions been exhausted. Owing to the loss of territory or proximity to war fronts the area available for agriculture had also been diminished.” 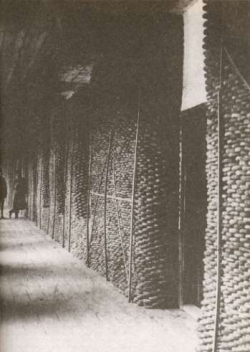 A bread storage in Istanbul

Transportation of food supplies form the production centers in Anatolia to Istanbul was another area that had problems. There was insufficient space on the railway connecting central Anatolian plains to Istanbul and in ships that connected Black Sea ports with the capital of the empire. The government had to intervene in order to ensure the optimal allocation of the scarce means of transportation. According to Şevket Pamuk, this situation led to nepotism, giving the CUP government the opportunity to select a small group of merchants to be granted the privilege of supplying Istanbul. Permits were issued for Muslim-Turkish entrepreneurs linked to the party. This practice was perfectly in line with the Turkish economic nationalism that was embraced by the government during the war.

As an attempt to ensure the provisioning of the capital city during the war, the government has directly procured agricultural produce from the farmers in Anatolia. Şevket Pamuk observes three stages in the evolution of the government’s procurement policy and how the farmers responded to it. In the first stage, during the earlier stages of the war, the government relied on the market mechanism to provide food supplies to Istanbul and other urban areas. However, soon shortages began to emerge, with the most severe ones being experienced in eastern Anatolia, northern Syria and Lebanon. Shortages forced the government to intervene in the food procurement process. All producers were required to keep only enough for seed and their family’s own subsistence and surrender the rest to the government at fixed prices that were below the market price. Of course, producers were adversely affected by this policy and it is no surprise that they often resorted to methods of concealing the harvest and hiding it from the government agents, which led to a further worsening of food provision to Istanbul and other urban areas.

As the situation deteriorated, the government moved to the third stage in 1917 when all producers were asked to surrender a certain proportion of their produce to the government, either as tax in kind or at some fixed price below the market rate, and sell the rest to whomever they wanted. Market dynamics were back in action and this led to an increase in production since the producers were willing to make the best they can from higher prices in the market. This third set of policies remained in effect until the end of the war. In 1918, a Food Ministry was established with Kemal Bey as the minister.

In sum, it was not only the availability of food that led to shortages and hunger, but inequities and injustices in the distribution of food among the different groups of the society was a problem as well. It can be argued that among all the belligerents, the Ottoman Empire was the one that was most severely affected by the food problem. This was not only because Turkish agriculture was much more vulnerable to the disruptions of wartime compared to other countries, but also because of the government was not capable of dealing with these problems. Ahmed Emin Yalman talks about the “unbelievable mismanagement of the food problem” which he says was the real problem. According to Yalman the problem was not actual shortage, but poor distribution, waste of resources, blind experimenting, and a monopoly that almost always served the private interests of those close to the government. The real public interest was hardly understood by those in power who saw no harm in encouraging food profiteering. It has to be remembered that a state of famine existed during the last two years of the war in all parts of the Ottoman Empire.