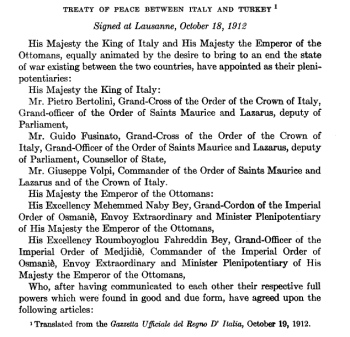 This is the peace treaty that ended the Turco-Italian war in Northern Africa in 1911-1912. It was signed in Ouchy (a lakeside district of Lausanne in Switzerland) on October 18, 1912.

TREATY OF PEACE BETWEEN ITALY AND TURKEY SIGNED AT LAUSANNE, SWITZERLAND, OCTOBER 18, 1912.

His Majesty the King of Italy, and

His Majesty the Emperor of the Ottomans

being equally desirous of putting an end to the state of war existing between the two countries, have appointed as their plenipotentiaries :

His Majesty the King of Italy :

Mr. Pietro Bertolini, Great Cross of the Order of the Saints Maurizio and Lazzaro, Deputy to the Parliament.

Mr. Giuseppe Volpi, Commendatore of the Orders of the Saints Maurizio and Lazzaro and of the Crown of Italy.

His Majesty the Emperor of the Ottomans :

His Excellency Mehemmed Naby Bey, Great Cordon of the Imperial Order of the Osmanie, Envoy Extraordinary and Minister Plenipotentiary of His Majesty the Emperor of the Ottomans

His Excellency Roumbeyoglou Fahreddin Bey, Grand Official of the Imperial Order of the Medjidie, Commander of the Order of the Osmanie, Envoy Extraordinary and Minister, Plenipotentiary of His Majesty the Emperor of the Ottomans

Who, after having exchanged their respective Full Powers, and having found them in good and due form, have agreed upon the following articles:

ARTICLE I. The two governments undertake, immediately after the signature of the present Treaty, to take the necessary steps for the immediate and simultaneous cessation of hostilities. Special Commissioners will be sent to the scenes of hostilities to ensure the execution of the above-mentioned steps.

ARTICLE III. Prisoners of war and hostages will be exchanged with as little delay as possible.

ARTICLE IV. The two governments undertake to grant full and complete amnesty, the Royal Government to the inhabitants of Tripoli and Cyrenaica, and the Imperial Government to the inhabitants of the islands in the Aegean Sea, subject to Ottoman sovereignty, who may have taken part in the hostilities or may have compromised themselves in that connection, without committing crimes against the civil law. In consequence, no individual of any class or condition shall be proceeded against or troubled in his person or property, or in the exercise of his rights on account of political or military acts, even of opinions expressed during the hostilities. Persons detained or deported for such cause shall at once be set free.

ARTICLE V. All treaties, conventions, and undertakings of all kinds, sorts, or nature concluded or in force between the two high contracting parties previously to the declaration of war shall at once come into force again, and the two governments shall be placed in regard to each other, as shall their respective subjects, in the identical position in which they were before the outbreak of hostilities.

ARTICLE VI. Italy undertakes to conclude with Turkey, at the same time as she renews her commercial treaties with other Powers, a commercial treaty based on European public law that is to say, she consents to leave Turkey all her economic independence, and the right to act in commercial matters and matters of Customs in the same way as all European Powers without being bound by the Capitulations and other Acts now in force. It is clearly understood that the said Commercial Treaty shall not come into force except in so far as commercial treaties concluded by the Porte with other Powers on a similar basis shall be in force. Further, Italy consents to the increase from 11 per cent to 15 per cent of the AD VALOREM Customs duty in Turkey, as well as to the creation of new monopolies, of the levying of consumption surtaxes on the five following articles: Petroleum, cigarette paper, matches, alcohol, and playing cards. All this is on condition that the same treatment be applied simultaneously and without distinction to the imports from other countries. In so far as there is a question of the importation of articles which are the object of monopolies, the Administration of such monopolies is bound to procure goods of Italian origin, according to a percentage based on the annual importation of these goods, provided that the price offered for the supply of such monopoly goods shall be in conformity with the state of the market at the moment of purchase, taking into consideration the qualities of the goods to be supplied and the average price ruling during the three years preceding that in which war was declared for similar qualities. It is further understood that, should Turkey, instead of establishing new monopolies on the five articles mentioned above, decide to levy consumption surtaxes on them, such surtaxes shall be imposed in the same degree on the similar products of Turkey and all other nations.

ARTICLE VIII. As the Porte proposes to open negotiations, at a European conference or otherwise, with the Great Powers interested for the cessation of the capitulary regime in Turkey, and the substitution for it of the regime of international law, Italy, recognizing the good grounds for these intentions of the Porte, declares its willingness henceforth to give the Porte its full and sincere support to this end.

ARTICLE IX. The Ottoman Government, being desirous of testifying its satisfaction with the good and loyal services rendered to it by Italian subjects employed in different branches of the Administration, whom it was forced to dismiss on the outbreak of hostilities, declares its readiness to reinstate them in the situations which they gave up. Half pay will be given to them for the months that they were unemployed, and this interruption in their service will in no way prejudice employees having the right to a retiring tension. Further, the Ottoman Government undertakes to use its good offices with the institutions

with which it has relations (the Public Debt, Railway Companies, Banks, &c.) to obtain the same treatment for Italian subjects who were in their service and found themselves in a similar position.

ARTICLE X. The Italian Government undertakes to pay annually to the Caisse of the Public Debt, on account of the Imperial Government, a sum corresponding to the average of the sums which, in each of the three years preceding that of the declaration of war, had been assigned to the service of the Public Debt out of the receipts of the two provinces. The amount of the said annuity shall be determined in agreement by two Commissioners appointed, one by the Royal Government and the other by the Imperial Government. In case of disagreement the decision shall be referred to an arbitral court composed of the said Commissioners and an arbitrator appointed by agreement between the two parties. Should no agreement be reached on this point, each party shall designate a different Power, and the choice of arbitrator shall be made jointly by the Powers thus selected. The Royal Government and the Administration of the Ottoman Public Debt, by the intermediary of the Imperial Government, shall have the right to demand the institution for the above-mentioned annuity of a corresponding sum capitalized at the rate of 4 per cent.

As regards the foregoing paragraph, the Royal Government declares that it recognizes at once that the annuity cannot be less than the sum of 2,000,000 Italian lire, and is ready to pay to the Administration of the Public Debt the corresponding capitalized sum directly a demand is made for it.

ARTICLE XI. The present treaty shall enter into force on the day of its signature.