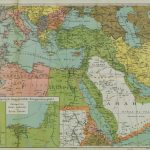 German map of the Middle East and Northern Africa

After the loss of the province of Tripolitania (modern-day Libya) to Italy in the war of 1911-1912, the local Sanusi tribe carried on its resistance against the Italians. Fighting was conducted by Sanusi militia under the leadership of Ahmad al-Sharif, whose followers in Fezzan and southern Tripolitania prevented Italian consolidation in these regions. 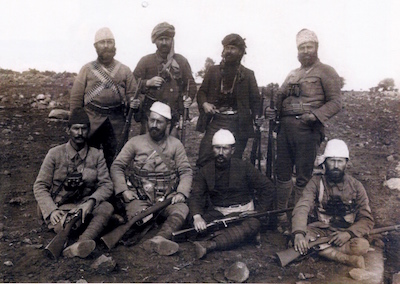 A group of Turkish officers in Tripolitania

The Ottoman government never ceased to provide assistance to those local tribesmen, and in fact it has continuously supported them by sending military officers to train the Sanusi militia. By assisting the local resistance in Tripolitania, the Sublime Porte was hoping to re-establish its sovereignty and prestige in the region, and to open a new front, which would draw British troops and thus reduce the strength of the opposition faced by the Germans in other fronts.

On the eve of the First World War, the total manpower of the Sanusi militia had already reached ten thousand. When fighting commenced following the declaration of Holy War in Istanbul in November 1914, the Sanusi militia, which was well trained by the Turkish officers from the secret service Teşkilat-ı Mahsusa, attacked the Italians and, through a series of successful operations, established superiority in the region. In January 1915, Fezzan was liberated and by July the same year, inner regions were cleaned from Italians, who were driven north to the Mediterranean coast.

When Italy declared war on Central Powers on May 24, 1915, the Italian-Sanusi War became a part of the World War. One of the pretexts for Italians to declare war was the alleged non-compliance of the Ottoman Empire with the provisions of the Ouchy Treaty. This claim was not baseless, given the activities of Turkish officers in the region. 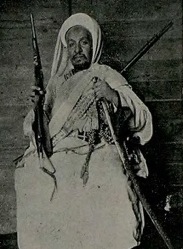 As a result of the successful Sanusi offensive and responding to the request of the local people, the Ottoman Empire announced the annexation of Tripolitania on October 15, 1915. The Ottoman General Staff began to send advisors and arms to Ahmad al-Sharif, who was leading the struggle under the title of Amir-al-Muminin (commander of the faithful) for Africa, and deployed a Turkish infantry battalion, which was supported by secret service personnel and a German squad. Ahmad in turn aligned the Sanusis with the Central Powers with the objective of tying down the Italian and British troops in North Africa. 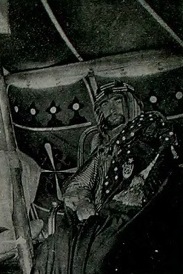 In 1916, Turkish officers led the Sanusis on a campaign to penetrate into Egypt. Sanusi militia attacked the Egyptian frontier, which was guarded by the British. This campaign proved to be successful and British forces had to evacuate Sollum and Seyd-i Barani, retreating to the town of Matrukh.

Sanusis pursued the British and launched a new offensive towards Matrukh, but this time it was a failure. Ahmad al-Sharif has resigned Sanusi political and military leadership. He had lost influence considerably, not only because of the loss on the battlefield but also due to the differences of opinion surfacing among Sanusi sheikhs. He withdrew to Djarabub first and then fled to Turkey aboard a German submarine. His successor was his cousin Mohammed Idris. 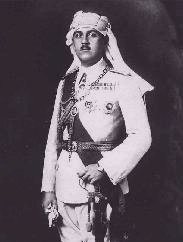 Meanwhile, as an attempt to organize the efforts in North Africa, the Ottoman General Staff established the Army Group Africa, of which the primary objective was the coastal regions of Libya. The first commander of this army group was Lt.Col. Nuri Bey, who was Enver Pasha’s brother.

Italian forces, which were trapped in Zuwarah, Al Khums and Tripoli, attempted to break through the Turkish-Sanusi encirclement twice in January and April 1917, both without success. In September the same year, a major offensive by the Army Group Africa on Tripoli finished all Italian hopes.

On January 3, 1918, Lt.Col. Nuri Bey was appointed to the command of the newly established Army of Islam and left for Azerbaijan. He was replaced by Crown Prince Osman Fuad Efendi. Several weak attempts by the Italians to break through the encirclement in 1918 failed again and when the World War ended, Italian forces in Tripolitania were still confined to their coastal enclaves; in most cases under conditions of siege. Except the harbors of Tripoli, Al Khums and Zwara, Sanusi warriors and Turkish forces were in complete control of the greater Tripoli region, Fezzan, Agades, all the territories west of Lake Tchad and Al Fasher region extending down to the Sudanese border. 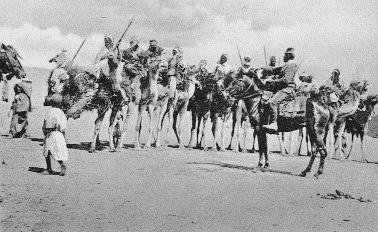 Drilling a camel corps in Tripoli

The Armistice of Mudros, signed on October 30, 1918, required immediate cessation of hostilities and the surrender of all Turkish officers and troops in Tripolitania. However, most of the Turkish officers there refused to lay down their arms and remained in Tripolitania, supporting the Sanusi leadership. They were led by Crown Prince Osman Fuad Efendi, who had left his headquarters in Misurata and moved south to the desert with 500 men. They had no intention to surrender to Italians, to whom they had never lost on the battlefield.

Osman Fuad Efendi and his comrades continued the war as if they were acting on their own. They crossed the border to Tunisia and finally surrendered to the French, weeks after the armistice. It was a conditional surrender, requiring the French never to hand over the Turks and the Sanusi to the Italians. The French commander first accepted these terms, but within less than 24 hours he changed his mind. Turkish officers and soldiers were handed over to the Italians and became prisoners of war. Most of the Sanusi militia was executed. Osman Fuad Efendi himself spent one year in a villa near Naples in Italy under house arrest.

The fall of Tripolitania caused profound sorrow among the Ottoman public.

The Sublime Porte had to carry out the painful duty of communicating the evacuation order of Tripolitania in accordance with the special article of the armistice. Poor fatherland of the Muslims! If you are falling under the boots of an alien nation, which has no connection with you, whatsoever, it is because of Wilson’s theories about the freedom of peoples are putting chains on you! Today we have nothing left to bequeath you except the sorrow of our hearts and the tears of our eyes. Yet, do not give up, do not surrender to sorrow! Let the chains embracing you strengthen your nerves! Let the cruelty that has covered your horizon intensify your will-power and your faith. (An article in Sebilürreşad, on November 7, 1918)

Sanusi militia in the trenches

Turkish-Sanusi cooperation in the First World War is a forgotten story. It today's Libya, it is still possible to see the pictures and personal belongings of those courageous Turks, in a museum commemorating the resistance against Italians. Turkish military existence in Libya continued from the war of 1911-1912 until the early months of 1919. Only 500 Turkish officers and soldiers fought at this front but they led the Sanusi militia, which numbered between 15 and 30 thousand according to different sources. When the war was over, Libya and Turkey were torn apart.

A last point that needs to be underlined is that it was only Libya and its leader Ahmad al-Sharif who responded to the Ottoman Sultan’s (i.e. the Caliph of Islam) call for a religious war, in other words jihad. Egypt, India, Caucasus, Turkistan and all countries of North Africa except Tripolitania remained in apathy, which was caused by either disinterest or British and French promises of independence after the war. From 270 millions Muslims living outside the Ottoman Empire, only 5 percent joined the war efforts and from among the remaining 95 percent, recruited soldiers even fought against the Caliph’s army and his allies.