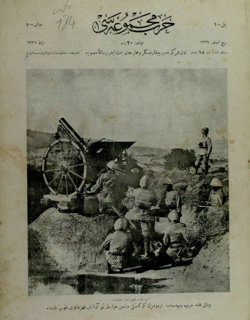 The capital of the Ottoman Empire, Istanbul, was an attractive target for the aircraft of Allied forces, not only because it hosted the headquarters of the Ottoman High Command and the key military facilities, but also because it hosted several important industrial, commercial and social targets. Being aware of the threat posed by enemy aircraft, the High Command issued a series of measures in March 1916, including the protection of the city with anti-aircraft guns, establishment of an early warning system, and a series of civil defense measures.

The first air raid on Istanbul came on April 12, 1916, when two British planes departing from the island of Imbros on the Aegean Sea dropped a total of 11 firebombs on the munitions plant in Zeytinburnu and the aircraft hangars in Yeşilköy, at the same time dropping propaganda leaflets on the city itself. It was a small squadron with limited armament capacity, and apparently its aim was not inflict damage on the city, but to give the message that Istanbul was not untouchable.

Istanbul was vulnerable. After this initial raid, the Ottoman High Command issued a second series of measures for the defense of the imperial capital. This decree stated that the air raids were likely to come from either the Black Sea or the Aegean Sea, and implied the following: "(i) Since enemy planes can take off not only from Aegean islands but also from battleships, Saros and Edremit bays will be closely monitored for approaching enemy vessels; (ii) Aircraft watch posts connected to Turkish air units through phone or telegram lines will be positioned on possible routes of enemy aircraft; (iii) Anti-aircraft batteries will be positioned in Kağıthane, Zeytinburnu, Yeşilköy, Okmeydanı, Osmaniye, Sarayburnu, İstinye, Tophane, Başıbüyük and Baruthane; (iv) All city lights are to be blackened out during air raids." These measures proved to be effective against enemy attacks in the following months. However, the air raids also showed that civilians were left to a great extent uninformed about what to do.

It was in early 1917, when the threat against Istanbul began to escalate. As of March that year, vessels of the Russian fleet were positioned close to the northern entrance of Bosphorus. On March 26, three planes taking off from the Russian ships got engaged in a dogfight with Turkish planes and one of them was shot down. A similar raid was launched again on April 4, and Russian planes bombed the entrance of the Bosphorus and the village of Kilyos before they were engaged by Turkish aircraft.

Apparently, this was all the Russians were capable of doing; and their aircraft were not to reach the city itself. However, soon the Turks found out that British aircraft were to pose a greater threat. On the night of July 9, 1917, two of them approached Istanbul from the west, via Çanakkale and Şarköy, with the multiple objectives of sinking the warship Yavuz, destroying the aircraft hangars at Yeşilköy, and damaging the building of the Ministry of War at the city center. One of the planes flew to İstinye and dropped four bombs on the warships anchored at the bay. They missed Yavuz, but Numune-i Hamiyyet and Yadigar-ı Millet were hit. The former sunk within 45 minutes and the latter survived with minor damages. 30 sailors were killed in the attack and 10 others were wounded. The other plane, meanwhile, dropped its bombs on the Ministry of War. One of the bombs hit a stable on the front yard of the Ministry building, without causing much damage, killing only two animals.

Although these air raids did not fully achieve their objectives, they made the Ottoman High Command realize that the danger was greater than they anticipated. As a response, a new unit, Istanbul Command of Air Defense (İstanbul Muharebat-ı Havaiyye Komutanlığı), was established, together with the introduction of a series of measures to protect the civilians. However these measures could not be implemented effectively for which the government came under strong criticism.

The year 1918 saw the intensification of air raids against Istanbul and other coastal towns such as Izmir, Trabzon, Beirut and Antalya. These attacks were mainly directed against military buildings and industrial facilities such as munitions factories.

On July 7, 1918, five enemy planes dropped bombs on the munitions factory in Zeytinburnu, on the train station in Haydarpaşa as well as the Golden Horn, Selimiye and Davutpaşa Barracks and the Gülhane Gardens. Air raids were a novelty for the inhabitants of Istanbul and instead of going to bunkers, people were going out to the streets to watch the spectacle.

Consecutive raids on July and August 1918 did not cause much damage in the city either. Meanwhile, the Turks was getting more experienced in air defense. A more effective intelligence network was established, which allowed them to be informed about approaching enemy planes as early as possible. As the enemy planes approached, the whole city was blackened out and the aircraft were spotted using projector lights, after which came heavy artillery fire. In addition to the artillery, the Turkish 9th Aircraft Squadron was responsible for chasing and engaging the enemy.

This greater efficiency in air defense bore its fruits during the attack on the night of August 27, 1918, when British aircraft failed to get close to their objectives and one of them was shot down with the artillery fire and the wounded British pilot was taken prisoner. During that raid, four bombs fell on the front yard of the Ministry of Navy.

The end of the war was nearing, and the Allies had begun to increase the pressure on the capital of the Ottoman Empire. On August 13, the police issued another series of measures to protect the civilian population. People were asked to be especially careful against spies in the city leaking information on strategic targets.

Allied forces launched two raids on September 20 and 21, 1918, with planes taking off from the base on the island of Imbros, in order to break the spirit of the people of Istanbul. During the first wave, the planes did not drop bombs, but the second wave was heavier. One of the planes was shot down by Turkish artillery over Çanakkale, but the rest of the squadron made it to Istanbul. Another plane was hit there and had to land on the sea near Kartal, with two British airmen taken prisoner.

The largest air raid on Istanbul came on October 18, 1918. During the first wave in the morning seven enemy planes menaced the city for twenty minutes, dropping their bombs on the most crowded streets. The second wave came in the afternoon, this time with five planes. 70 civilians were killed during these attacks and 200 wounded. Sultan Vahdettin himself had to seek shelter in a mosque since he was caught by the attacks as he was going to the mosque for the Friday prayer.

On October 25, 1918, Istanbul saw the last air attack before the armistice. As information arrived about six British planes approaching the city from the direction of Çanakkale, four planes of the Turkish 9th Squadron took of under the command of Cpt. Fazıl Bey. The other planes were flown by Lt. Vecihi Bey, Austrian pilot Max Souchin and a German pilot. Soon after they had taken off, the German and Austrian pilots fell behind and left the group. After 1.5 hours of searching for the enemy, Vecihi Bey’s plane ran out of fuel and had to return to the base. Cpt. Fazıl Bey was now left alone. Although he received several bullet wounds, he managed to shoot a British observer and return safely to Yeşilköy.

A few days after this incident, the Ottoman Empire was to sign the armistice and Istanbul was soon to be under occupation of the Allied forces.