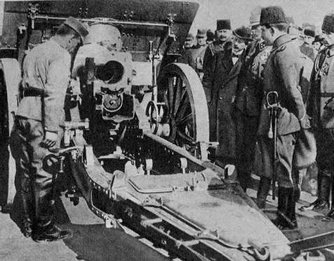 On the eve of the World War, the Ottoman Army was not well prepared for a large scaled war effort. It had only an insignificant munitions industry of its own and relied on imports and grants from its allies for its needs of weapons and equipment. This dependence on Germany and Austria-Hungary continued during the course of the war.

It was Sultan Abdülhamit II, who first became aware of the need to renew the weapons of the army in late 19th century. At that time, when European arms industries were in rapid progress, the Ottoman Army had only obsolete weapons with low efficiency. A delegation led by one of the brightest Turkish mathematicians of the time, General Vidinli Tevfik Pasha, was sent to Germany to purchase Mauser rifles. 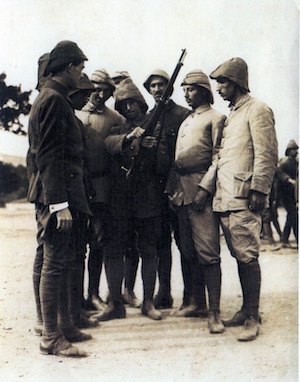 According to the agreement made with Germany, Turkey was supposed to buy Model 1877 (M1877) rifles in 9.5 mm caliber. After 84,732 pieces of M1877 was manufactured, the Turkish government changed the order to the M1893 model in 7.65 mm caliber. Rifles of this model were 122.5 cm long and they had a short staggered-column box magazine holding five 7 x 57 mm rounds flush with the bottom of the rifle, which could be quickly reloaded by pushing a strip of rounds down from the top of the open bolt. A further 643,672 pieces of this model was manufactured.

In 1908, when constitutional rule was restored, the Ottoman Army had mostly basic rifles and only a few number of rapid firing ones. The infantry and the cavalry were using U.S. made breech-loading lever-actuated Martini-Henry rifles, model 1874. These rifles were 126 cm long and weighed 3.83 kg. They fired .451-inch caliber rimmed cartridge, which was also manufactured at Zeytinburnu Munitions Plant in Istanbul. A sword bayonet was standard issue for noncommissioned officers, when fitted the weapon extended to 173 cm, and the standard bayonet was a socket-type spike example. The cavalry was also using the U.S. made Winchester carbines. The total number of Martini-Henry and Winchester rifles in the army was 233,145, which together with the Mausers brought the total number of rifles to 901,549.

During the first decade of the century, the Ottoman Army had no machine gun units. These kinds of guns were only used in warships and for coastal defense. There was only a few number of machine guns and they were all Maxim-Nordenfeld. Heavy weapons included light artillery and howitzers.

The total cost of newly purchased ammunition was 1.7 million golden liras, of which 15 percent was paid in advance and the rest in installments at an annual interest of six percent. In 1912, the total number of cartridges available increased to 886 million pieces including those imported from Germany and manufactured locally.

Although the stock of the rifle ammunition was at acceptable levels, there was a serious problem about the artillery ammunition. Especially the 7.5 cm rapid firing field guns and mountain guns were suffering from a lack of cartridges. In 1908, 167 thousand pieces of shrapnel was ordered at the Erhart in Germany.

The situation improved in the following years and decree issued on July 3, 1910 improved the budget for purchases of arms and ammunition. The army, which was equipped relatively compared to a few years ago, entered two arms in 1911-1912. The Turco-Italian War in Libya did not cause a radical consumption of stocks, because the Turkish Navy was not in a position to transport the supplies to this overseas province. When the war began, there were only 12 pieces of 7.5 cm field guns in Libya with 300 cartridges for each. Later a further 24 pieces of 8.7 cm guns were brought in from Salonica. 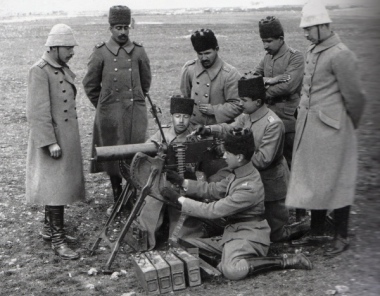 The material cost of the Balkan War was much higher. Several guns were left behind in cities lost to the Balkan armies, such as Ioannina, Salonica, Shkoder and Edirne. These guns included 44 pieces of 7.5 cm Krupp rapid firing field guns, 18 pieces of 15 cm Krupp howitzers, and 18 pieces of 10.5 cm Krupp field guns. The loss in infantry rifles was much more dramatic.

Support from the allies and new purchases continued after the Balkan War and throughout the course of the World War. In total, Germany provided 559 pieces of artillery, 557 thousand rifles, 100 thousand carbines, 1570 light machine guns, 30 heavy machine guns, 930 million rifle cartridges, 500 thousand artillery cartridges, 200 thousand shrapnels, 300 aircrafts, 16 thousand gas masks and 30 flame throwers for the Ottoman Army until the end of the war. 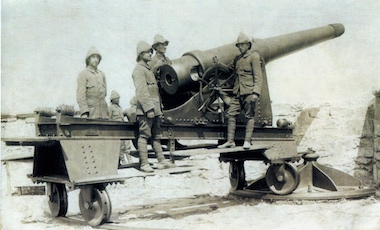 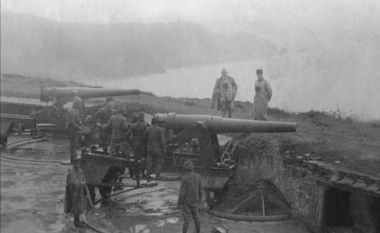 Additionally, mobile army units had 856 guns and there were 912 guns in the fortified zones of Çatalca, Çanakkale, Bosphorus, Edirne and Erzurum, bringing the total to 2155 guns. For each gun there was an average of 588 cartridges. Krupp was the major supplier of artillery guns for the Ottoman Army, but there were also Austro-Hungarian Skoda guns and French Schneider guns in duty. 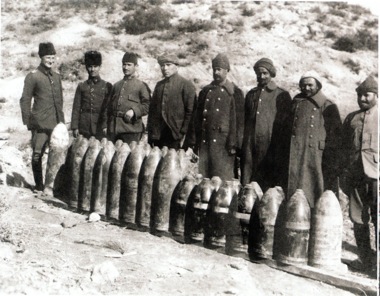 In 1914, as Turkey entered the war, there was 1.5 million infantry rifles available in the army. The main rifle was the Turkish Mauser and in addition to the models M1877 and M1893, there were also M1887 and M1890 rifles in use. Austrians sent adapted Russian Mossin-Nagant M1891 rifles. Older models of Martini-Henry and Winchester remained in use and there were also British, Russian, French, Bulgarian, Greek and Romanian rifles, though small in numbers. Bayonets were made by German companies in Solingen and Suhl. Cavalry was armed with a rifle of carbine, usually Mauser M1905.

The Ottoman Army had a serious shortage of machine guns and there were only a handful of Maxim, Schwarzlose and Hotchkiss machine guns at the beginning of the war. Maxim light machine guns (M1908) had a caliber of 7.92 mm and they weighed 14.6 kg. They had an automatic rotating bolt fed by a 50-round drum. Maxim heavy machine gun weighed 22.2 kg and it was fed by a 250-round drum. Both versions had an effective range of 2,011 m.

Turkish officers were carrying pistols at all times. The model most commonly used was the Mauser Parabellum, a semi-automatic self-loading pistol manufactured by Deutsche Waffen und Munitions Fabrik. It had a caliber of 9 mm and was fed by a 10-round fixed magazine. The widely used version was the 1896 model, of which the main characteristics were the magazine forward of the trigger, the long and protruding barrel, and the handle shaped like the end of a broom handle. Its length was 288 mm and its unloaded weight was 1100 gr. This pistol had an effective range of 500 m.

Another pistol that was used by Turkish officers was the Browning. It was produced by the Fabrique Nationale under the patent of the U.S. manufacturer Browning. It was a semi-automatic pistol, with grips made of black plastic. It had a seven shot magazine and a rear grip safety catch. The pistol's length was 205 mm.

Turkish infantry used two different kinds of grenades. The most commonly used offensive grenade was the German stick grenade Stielhandgrenate. It weighed 0.5 kg, its fuse length was 4.2 seconds and it could be used at an effective range of 10 m. There were also defensive grenades used by the infantry troops and these ones were "ball" and "egg" shaped.

After the armistice was signed in October 1918, the disarmament of the Ottoman Army began. The army was allowed to keep 40,878 rifles, 240 machine guns and 256 pieces of artillery. The rest was handed over to the Allied forces.