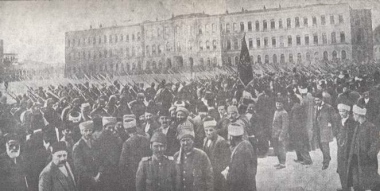 Soldiers assembling in front of the Ministry of War

The highest ranking military authority in the Ottoman Empire was, according to both the constitution proclaimed in 1908 and the Ottoman tradition, the Sultan himself, who had the title of Head Commander (başkomutan). Although Ottoman sultans of earlier eras were leading their armies personally on the battlefield and taking an active part in battles and campaigns, for those in the early 20th century, namely Abdülhamit II, Mehmet Reşad and Vahdettin, the title of Head Commander remained only in theory, and this authority was exerted through either a group of high ranking staff officers and/or an Acting Head Commander (başkomutan vekili). 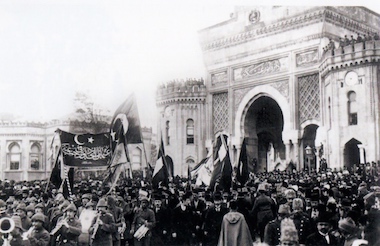 In the aftermath of the abolition of Janissaries as an institution in 1826, the Ministry of War (Harbiye Nezareti) became the highest body of army organization. Until the reinstalment of the constitutional rule in 1908, this Ministry was far from functioning efficiently. It had only three departments (infantry, artillery and cavalry) among which there was no coordination at all. Reformation of the Ministry of War began with Mahmut Şevket Pasha, who was appointed minister in 1910. A process of substantial restructuring took place of the following two years in which Mahmut Şevket Pasha received a great support by young and well educated officers in the ministry.

During this period, the main departments in the Ministry of War were the general staff, infantry, heavy artillery, field artillery, cavalry, transportation, medical, veterinary, communications, engineering, judiciary, supplies and accounting. Additionally, there were also the Inspectorate General of Fortified Zones, Inspectorate General of Education, Directorate of Military Factories and the Gendarmerie Command, which were directly reporting to the Ministry of War. 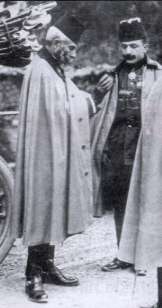 The War Council (Askeri Şura) was established in 1909 as a commission within the Ministry of War. It had both permanent and provisional members. The War Council was chaired by the minister of war and the permanent members were the chief of general staff, commanders of First, Second and Third Armies and the Commander of the 1st Cavalry Division. Provisional members attended the meetings of the council when it was necessary and they were the cavalry commanders of the First and Third Armies and the deputy chief of general staff. Heads of departments could attend the meetings only on occasions when they were asked to express their opinion on specific issues, but they had no voting rights.

The War Council had the task of discussing issues related to the organization of the army, mobilization, strategies, training, armaments, fortified zones and promotions of generals. It convened whenever it was deemed necessary or when the sultan called for a meeting. Regular meetings were held on the first Monday of every month.

The War Council was abolished when Enver Pasha became the minister of war and there was no such institution during the course of the World War. It was re-established after the armistice, but was short-lived. The last meeting of the War Council was held on 18 April 1920.

The General Staff (Erkan-ı Harbiye-i Umumiye Dairesi) was a department within the Ministry of War. Before the proclamation of the constitution in 1908, it had only secondary importance and was responsible for work such as recruitment, reserves, judiciary and printing charts, because at that time the main military institution was the office of the head commander, which basically meant the group of high ranking staff officers that was close to the sultan.

Ahmet İzzet Pasha, who became the chief of general staff on August 15, 1908, was aware of the urgent need of this institution to be reformed. The common belief of the time was that this was not possible if the chief of staff remained merely as a department of the Ministry of War and the main responsibility remained with the office of the head commander. An opportunity to change this arose when Sultan Abdülhamit II was dethroned in 1909. The sultan's group of high ranking staff officers was abolished.

Ahmet İzzet Pasha’s work produced good results and he managed to provide a better and much more efficient structure for the General Staff. At the outbreak of the Balkan Wars, the General Staff was divided into seven departments and it formed the headquarters of Nazım Pasha, the acting head commander. When the war was lost, further changes were needed and these came with Enver Pasha, who on January 3, 1914 replaced Ahmet İzzet Pasha as both the minister of war and the chief of general staff. With the advice he received from the German Military Mission, he restructured the General Staff. At the same time there was also the office of the acting head commander that was also held by Enver Pasha.

During the course of the World War, the Ottoman General Staff had seven departments: operations, intelligence, railroads, education, military history, personnel and documentation.

The office of the acting head commander was abolished by Sultan Vahdettin on October 7, 1918 and after the armistice was signed, the general staff was reorganized into ten departments. However, after the Treaty of Sevres, it was reduced to four departments. The national movement in Ankara, led by Mustafa Kemal, established its own general staff on May 2, 1920, a few days after the opening of the Turkish Grand Assembly.