On the eve of the First World War, the Ottoman Empire was in ruinous shape. As a result of subsequent wars fought in this period, territories were lost, the economy was in shambles, and people were demoralized and exhausted. What the Empire needed was time to recover and to carry out reforms. However, there was no time, as the world was sliding into war and the Ottoman Empire was highly unlikely to manage to remain outside the coming conflict. Since staying neutral and focusing on recovery did not appear to be possible, the Empire had to ally with one or the other camp, because, after the Turco-Italian and Balkan wars, it was completely out of resources. There were not adequate quantities of weaponry and machinery left and neither did the Empire have the financial means to purchase new ones. The only option for the Sublime Port was to establish an alliance with a European power, and at first it did not really matter which one that would be.

Turkey needed to join one of the country groups so that it could organize its domestic administration, strengthen and maintain its commerce and industry, expand its railroads, in short to survive and to preserve its existence. (Talat Pasha in his memoirs)

The problem was that the European powers were not really keen to conclude an alliance with the ailing Ottoman Empire. Already at the beginning of the Turco-Italian War in Northern Africa, the Grand Vizier Sait Halim Pasha had expressed the government’s desire to form an alliance and the Turkish ambassadors were asked to find out whether the European capitals would be interested. Only Russia seemed to have an interest, however under conditions that would have amounted a Russian protectorate on the Ottoman lands. 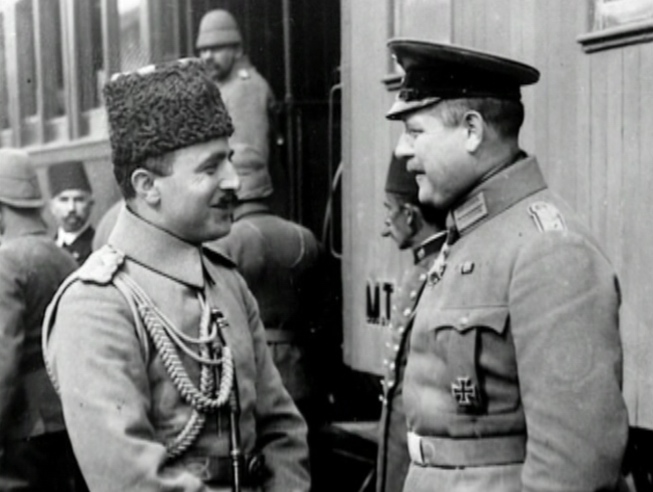 Enver Pasha with a German officer

In time, two different views emerged within the Ottoman government regarding which group of powers the Empire should approach to for an alliance. The moderates in the government, which outnumbered the extremists, favored an alliance with Britain and France, because they felt that it was these countries that posed the greatest threat for the Empire. In contrast, the extremists saw benefits in joining Germany and Austro-Hungary.

The moderates believed that Germany and Austria could not constitute a direct danger because of their geographical position and an alliance with the Entente would minimize the threat faced by the Ottoman Empire. Britain was the first destination for a diplomatic overture, which was made as early as in October 1911, when the Minister of Finance, Cavid Bey, sent a letter to Churchill expressing informally the Sublime Porte’s interest in an alliance with the Britain. The latter’s response was negative. A formal approach to Britain was made in 1913 when the Ottoman Ambassador in London, Tevfik Pasha, submitted the government’s interest to the British government, only to be turned town politely for a second time. The British government did not see any benefits in forming an alliance with the Ottoman Empire.

Russia was approached as well. In May 1914, Talat Pasha and İzzet Pasha went to Crimea, to extend the Sultan’s greetings to the Tsar Nicholas II. On the last day of their visit, Talat Pasha met with the Russian Foreign Minister Sergei Sazonov and informed him about his government’s willingness to establish an alliance with Russia. This meeting did not produce any outcome.

France was another country that the government has contacted. In July 1914, the Minister of Navy, Cemal Pasha, who was at the same time the chairman of the Turco-French Friendship Association, was sent to Paris to negotiate an alliance. Such as the previous ones, this attempt also came to no avail. The French side told Cemal Pasha that it was not willing to negotiate an alliance with the Ottoman Empire without the approval of Russia. They simply did not want to jeopardize their relations with Russia, without which they felt they would not be able to deal with Germany. In his memoirs, Cemal Pasha wrote that he never expected that he would be disappointed so deeply. 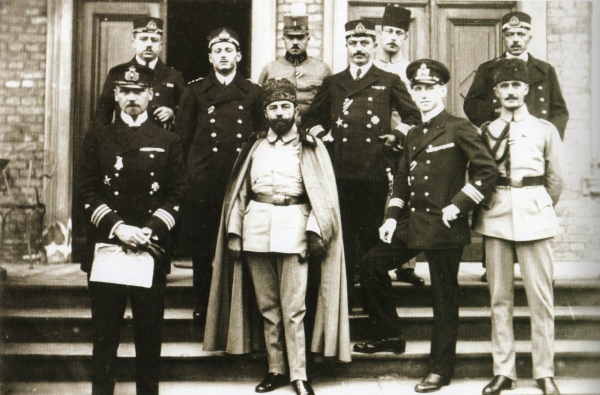 Cemal Pasha during a visit to Germany

Being turned down by the Entente, the Sublime Porte had no choice but to approach the Central Powers. The extremists in the government, including Enver Pasha himself, favored an alliance with Germany anyway, since they believed that Germany had the strongest army in Europe. In their view, Germany had no territorial interests in the Ottoman Empire and therefore, compared to the Entente powers, she would be less dangerous for the Ottoman Empire if victorious in the war. Being allied with Germany could save the Empire from dissolution and it could even be strengthened if Germany won the war. Cemal Pasha, who had previously favored an alliance with the Entente, wrote in his memoirs:

Germany’s interests can only be protected if Turkey is strong. Germany cannot capture Turkey as a colony. Neither its geographical position nor the means it has would make that possible. This is why Germany does not want Turkey, which offers a market to be linked to its own, to be partitioned by the Entente powers. The moment when Turkey disappears, Germany would find itself trapped inside the steel ring of the Entente. The only way for Germany to prevent is to make sure that Turkey remains intact. (Cemal Pasha)

However, the German government was hesitant to conclude a formal military alliance with the Ottoman Empire. Both the Foreign Ministry in Berlin and the German Embassy in Istanbul believed that the Ottoman army was simply too weak and it would be nothing but a burden on Germany’s shoulders during the war.

Enver Pasha offered an alliance to the German Ambassador Hans von Wangenheim on July 22, 1914. The ambassador first turned the offer down, however he was overruled by Kaiser Wilhelm who saw an opportunity in having Turkey by the Central Powers’ side. No matter how weak the Ottoman army was, it could still cause considerable anxiety in the Entente by attacking the British possessions in the Middle East and the Russian possessions in the Caucasus. What the Kaiser wanted was to open additional fronts against the enemy and use any available means they have. He instructed Wangenheim to sign the alliance treaty only on the condition that the Ottoman Empire would take quick action against Russia, which it eventually did. The alliance was concluded on August 2, 1914, at a time when Germany was already at war. 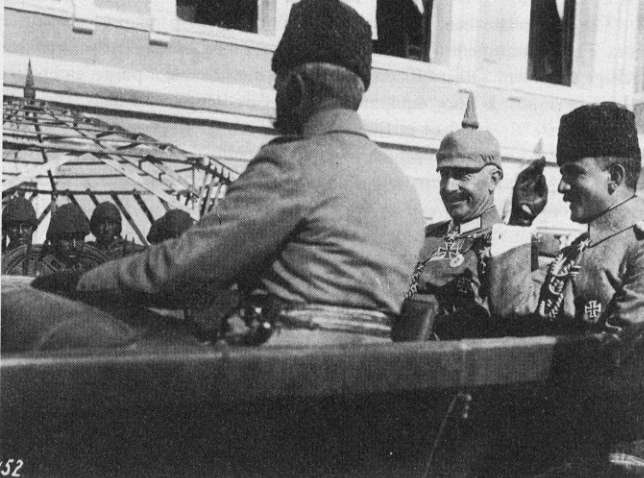 The alliance treaty was signed in great secrecy and only five men in Turkey knew about it. Cavid Bey criticized it on grounds that it would turn the Empire into a tool in the hands of Germans. In contrast, Cemal Pasha, who was informed about the treaty one day after it was signed, was happy to see the Empire as a part of one of the two camps of great powers. Sait Halim Pasha was naive; he was thinking that the treaty would allow the Empire to maintain its neutrality in the war, which was obviously not the case. Talat Pasha and Enver Pasha knew that the document would take the Ottoman Empire into the war. For Talat, it was a gamble, because in the face of the approaching war, they did not have any chance anyway, but a possible German victory could take the Empire out of the chaos it was in. For Enver, siding with the Germans could also help to achieve pan-Turkic objectives in Asia.

At this moment, the moderates in the government were not keen to enter the war on any side; what they wanted was to take advantage from the international situation to ensure complete independence and to focus on domestic reforms. To that end, they tried to ensure the Entente that the Ottoman Empire would remain neutral. On the other hand, the extremists wanted to benefit from taking part in the war.

A few days after the Turco-German treaty was signed, Enver surprisingly offered the Russian military attaché in Istanbul, General Leontieff, a Turco-Russian alliance in return for recognizing the independence of the Ottoman Empire and rearranging the Balkan map in the latter’s favor. The Russian side did not refuse the offer, but also did not enter into any kind of engagement. It remains unknown whether Enver was trying to gain time or he was really willing to side with Russia and engage in war against the Central Powers.

Moderates and extremes in the Ottoman government struggled over the issue –on whether the Ottoman Empire would engage in the war or remain neutral– as the hostilities were already in progress on the European continent. In late October 1914, a fait accompli of a German admiral who took his two ships, Goeben and Breslau, to the Black Sea under Turkish banner and bombard Russian ports would settle the matter.