Centenary of Atatürk’s landing on Samsun marked across Turkey 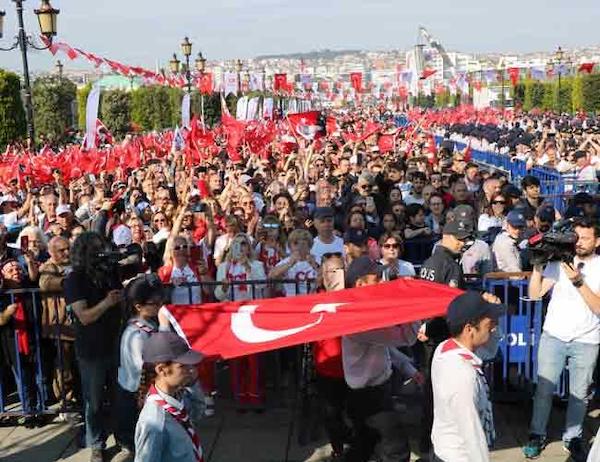 Turkish people celebrated the Commemoration of Atatürk and Youth and Sports Day on May 19, marking the centenary of the starting point of the Turkish War of Independence and the emergence of modern Turkey.

On May 19, 1919, Mustafa Kemal, a general in the Ottoman army later to become the founder of the Republic of Turkey, arrived in the Black Sea province of Samsun from then capital Istanbul to organize the war that saw the remnants of the Ottoman Empire transform into modern Turkey four years later.

The day was dedicated to the youth of the Turkish nation as Youth and Sports Day, a national holiday that sees young people stage sporting and cultural activities and official ceremonies organized across the nation.

The focal point of the celebrations was Samsun, where a total of 182 students from Turkey and other countries travelled to on a three-day journey aboard the Piri Reis University Training Ship to retrace Atatürk’s route from that historical day.

Sailboats attending the Naval Forces Atatürk Rally race were also welcomed at the Tütün Quay, where Atatürk had set foot on after his journey in 1919.

Turkish record holder diver Şahika Ercümen, who holds the international free-diving record in the variable weight without fins discipline, dived in Samsun near the Tütün Quay to mark the day.

Turkish President Recep Tayyip Erdoğan, who also attended the events in Samsun, described the day as “the resurrection of [Turkish] nation,” in a message.

“Today, as was the case yesterday, it is you that will protect this country against the circles of treason and evil that target our freedom and independence,” he added.

“It is your ideas, your discoveries, your opinions, your tenacity and your resolve that will usher in new horizons for our country.”

Kemal Kılıçdaroğlu, leader of the main opposition Republican People’s Party (CHP), shared a video on his Twitter account to celebrate the day.

“Mustafa Kemal Atatürk entrusted the future of the country only to its youth. Therefore, the youth is our future, hope and everything,” said the video message.

In Istanbul, thousands got on bicycles to pedal for 12 kilometers in Kadıköy district ahead of the big march in the evening on the iconic Bağdat Avenue.

The milestone in Turkish history was also marked in events organized in every one of the 81 provinces of Turkey, alongside Turkish Cyprus and the diplomatic offices of Turkey abroad.

← Rebirth of Turkish nation featured at opera premiere
Turkey in the First World War © Dr. Altay Atlı, 2003-2019. The content of this web site is protected by Turkish and international copyright laws. Any redistribution or reproduction of part or all of the contents in any form is prohibited other than the following: i) you may print or download to a local hard disk extracts for your personal and non-commercial use only; ii) you may copy the content to individual third parties for their personal use, but only if you acknowledge the website as the source of the material.You may not, except with express written permission, distribute or commercially exploit the content.
Go Top